Nominations for acreage release areas in South Australian Competitive Tender Regions are required for new acreage releases in Competitive Tender Regions and should demonstrate a genuine intent to start activities should the release go ahead. Nominations may be made by either explorers or service companies. It is expected that exploration companies nominating areas would bid in the resultant acreage release and service companies should have recent non-exclusive data products over the nominated area available during the bidding round. There are no limits to the number of nominations a company can submit, however non-contiguous areas require separate nominations.

You must provide reasons for nominating an area. This is crucial in frontier areas with limited infrastructure or where Native Title exists. A nomination by an exploration company must include:

In addition to the above, a nomination by a service company must also include:

The Minister for Energy and Mining will consider and must endorse release areas before they can progress to an acreage release and bidding round. The government will consider their priorities when deciding to release acreage in an area including the following factors:

Note that nominated areas, or parts of areas, may be excluded for various reasons including:

Nominations for acreage release areas should be made to DEM.ERDLicensing@sa.gov.au

More than one Exploration Licence or Production Licence can be granted over the same area provided the rights to explore for or produce a particular regulated resource for each licence differs. Some areas are alienated from exploration and production operations (e.g. some protected areas under the National Parks and Wildlife Act 1972). An application should be made in accordance with legislative requirements and be accompanied by the prescribed fee.

The compulsory relinquishment for an exploration licence is either 331/3% or 50% (as determined by the Minister) of the original licence area and occurs upon renewal of the 5 year term of the licence. An exploration licence granted as a Petroleum Exploration Licence under the repealed Petroleum Act 1940 or an application for an Exploration Licence before 1 March 1999 will upon renewal be subject to a compulsory relinquishment of a minimum 25% of the original licence area. 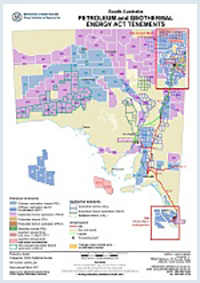