Geologists classify the rocks of a region by correlating, or grouping them together, on the basis of similar age, interpreted origin, and lithology, and frequently apply stratigraphic names (e.g. Sleaford Complex) to these groupings as an aid to communication. Our present understanding of South Australia’s geological history and mineral deposits is the result of the integration of over 150 years of careful observation of rocks and their relationships. As the inventory of geological understanding has grown, it has become evident that our preserved geological history occupies discrete spans of time, separated by periods of no record. At a broad level, the rocks formed during these spans of time are grouped into geological provinces, including sedimentary basins, with different names given to distinct groups of rocks formed during the same time period in different parts of the State.

The major subdivisions of geological time into Eons, Eras and Periods, and their age spans in millions of years (Ma), are indicated in the time scale. Most of these ages are determined by measuring the amount of decay of contained radioactive elements such as uranium for Precambrian rocks, and by examination of contained fossils for younger rocks. Unfortunately the age and relationships of many rock units unsuited to these techniques remain uncertain. Below are the major geological provinces present in South Australia, listed under time slices based on Eons and Periods.

More detail can be found by following the links.

A guide to the geology of Kangaroo Island

An interactive story map experience based on the department's geological field guide. 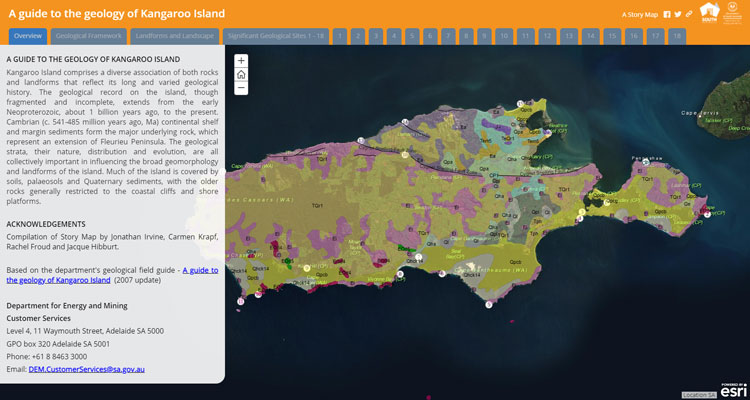