Small areas of disturbed land are rehabilitated each year by applying imported soil cover, mulch or manures, landscaping and planting out with pasture grass and seedlings.

Tube stock of a variety of native shrubs and trees are planted out in June or July of each year. Failures are replanted in following years until vegetation is established.

The most successful rehabilitation to date has been the establishment of vegetation on the tailings dam and tailings dam wall.

The tailings dam remediation commenced with trial planting in 1987 and has now been completed. Sludge from household septic tanks was deposited in the soil to provide nutrients and microbes to promote tree growth. This has been proven to be very successful as the tailings dam is the most densely treed area in the region.

Attention has shifted to the rehabilitation of small areas and will eventually conclude with the complete remediation of the Brukunga Mine. 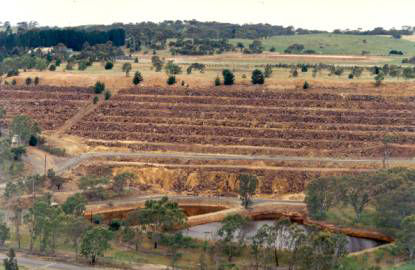 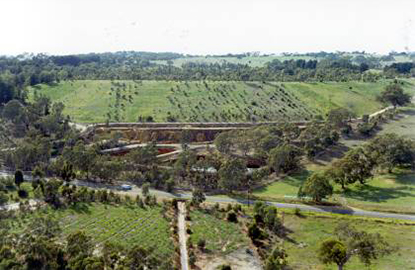 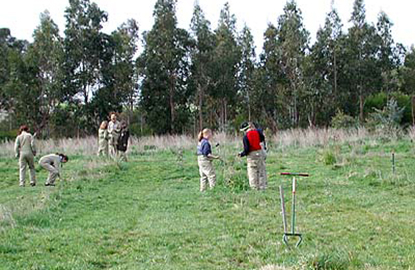 In 1999, a field trial was designed to identify an appropriate cover for the gypsum clay sludge produced by the treatment plant. The aim was to establish a soil and vegetation cover that would retain precipitation, reduce surface erosion, and conceal and protect the underlying pyrite minerals.

The clay was heaped to form regular shaped bunds on the mine bench. The bunds were topped with a variety of scavenged covers of soil, mulch, pea-straw, bio-solids, and horse manure.

The trees provide a part screen of the footwall backdrop. The vegetated bunds will be surveyed in the summers of 2014/2015 to determine the effectiveness of each cover treatment.

In Autumn 2001, the former metallurgical plant site was covered with imported soils and horse manure, and sown to pasture grass. In June 2001 Urrbrae High School students planted the area with tube stock. The combined vegetation of trees and established grass successfully reduced runoff from the area and prevented erosion of the surface cover.

For inquiries relating to the Brukunga Mine Site please contact:

or address correspondence to: