Petroleum Exploration Licence applications (PELAs) can be lodged at any time ‘over-the-counter’ over much of the State excluding the Cooper and Otway competitive tender areas (Fig. 1). The application fee is currently A$4,845 (subject to change from 1 July 2022), applications must include a 5 year work program with at least one exploration well and evidence of the applicant’s technical and financial capacity. A ‘top filing’ option exists over PELAs where the first ranked applicant does not make timely bona fide efforts to progress their application -  the first application may be refused, then the second assumes primacy (excluding PELAs with 'good faith' efforts to conclude Native Title agreements).

In competitive tender basins vacant acreage is only available via acreage releases where applicants bid five year work programs. At the time of writing (March 2022) a new acreage release in the Otway Basin is under consideration and industry consultation is planned at the 2022 APPEA conference and Exhibition.

All blocks from the most recent Cooper Basin release (CO2019) are under application and PELs have been offered to successful applicants. Farm-in opportunities exist for some Cooper Basin licences. In the Otway, Block OT2019-B has been granted (PEL 680), OT2019 A and B did not attract applications. DEM geoscientists are working to complete a hydrocarbon generation model for the Otway Basin for release this year and have identified new source rocks and plays.

Information about how to apply, the licence register and maps showing current licences and applications can be accessed in the Onshore licensing section. A total of 211 Petroleum Retention Licence (PRLs) have been granted over an area of 17,052 km2 and Petroleum Production Licences (PPLs) cover 7,410 km2 of the Cooper and Otway basins. On 11 February 2021 the Petroleum and Geothermal Energy Regulations 2013 were amended to declare hydrogen, hydrogen compounds and by-products from hydrogen production to be regulated substances under the Petroleum and Geothermal Energy Act 2000. Companies are now able to apply to explore for hydrogen via a PEL and the transmission of hydrogen or compounds of hydrogen are now permissible under the transmission pipeline licencing provisions of the PGE Act.

A total of 30 ‘over the counter’ applications have been lodged for PELs targeting natural hydrogen since February 2021 (Fig. 3). The first PEL was granted in July 2021 to Gold Hydrogen Pty Ltd. Additional proposed amendments to PAGEA2000 aim to provide hydrogen generators with a leading practice regulatory and one-window to government regime:

Production of hydrogen from processing natural gas or underground gasification of coal in combination with CCS (blue hydrogen) can occur through a Petroleum Production Licence and Gas Storage Licence. Santos are progressing clean hydrogen and by 2030 aim to use Carbon Capture and Storage (CCS) technology to improve the economic feasibility of blue hydrogen while reducing Cooper Basin emissions.

A new acreage release is planned in the SA Otway Basin in 2022 and industry feedback is sought. The Otway Hydrocarbon Generation Model is planned to be released in Q3/4 and will inform release block design. So far research for the model has led to a new stratigraphic framework and identified new potential source rocks.

As at March 2022, the relevant registered native title claimants/holders, petroleum explorers and the State Government have concluded 55 land access agreements in relation to a total of 51 licence areas:

All of these South Australian agreements cover the full cycle of petroleum activities including exploration, development and production.  An additional twelve PEL applications are currently progressing through the Right to Negotiate process, pursuant to the Native Title Act 1993 or will alternatively enter into an existing Indigenous Land Use Agreement.

The following conjunctive ILUAs are in place over much of the Cooper Basin:

A meeting was held with representatives of the Dieri native title holders in February 2020 to initiate discussion on the development of a similar conjunctive ILUA.

To date, industry has signed on to at least nineteen ILUAs with the Yandruwandha/Yawarrawarrka and Wangkangurru/Yarluyandi people, of which 12 related to the granting of PELs in the Cooper/Eromanga Basins.

The Cooper Eromanga Basins Aboriginal Conference (CEBAC), supported by the South Australian Government, was most recently held in October 2019 and continues to bring together representatives from the Dieri, Yandruwandha/Yawarrawarrka and Wangkangurru/Yarluyandi people together with executives of oil and gas industry participants within the basins, as well as government officials in order to foster ongoing relationship building and increased Aboriginal participation in the oil and gas sector workforce.

In late 2021, DEM engaged KSJ Consulting Services Pty Ltd (KSJ) to undertake a review of the current and prospective CEBAC opportunities. As part of the review, KSJ will focus on three key areas; Aboriginal business capability, Industry review and program review with recommendations and implementation

Petroleum drilling levels dropped in 2021 from 109 wells in 2020 to 52 in 2021, with 5 exploration wells, down from 10 in 2020 (Figures 4 and 5). Exploration successes include Beach Energy’s Lowry South 1 and Rosebay 1 and Vintage Energy’s Odin 1 natural gas discoveries. Drilling of gas appraisal and development opportunities continue as the main focus in the Cooper Basin.

As at 27 March 2022, 2 Exploration, 6 appraisal and 7 development wells have been drilled in the Cooper-Eromanga basins this year with another 2 wells currently drilling. Current success rates are shown in Table 1. No petroleum wells were drilled in the SA Otway Basin in 2021.

Leigh Creek Energy plans to produce energy from coal using a process known as underground coal gasification (UCG), also known as In-situ Gasification (ISG). The UCG process converts coal from its solid state into a gaseous form, resulting in the generation of synthesis gas (syngas) containing methane, hydrogen and other components. The syngas is proposed to be used to either produce electricity directly or further refined into a variety of products such as ammonia.

Leigh Creek Energy in 2018-19 constructed and operated a UCG pre-commercial demonstration plant (PCD) at Leigh Creek, within the old mine site. This demonstration plant involved the establishment of a single gasifier chamber and associated above-ground infrastructure to produce syngas for a short period of time, to test the syngas composition and process performance to enable consideration of potential commerciality.

Any future exploration or UCG activities will be subject to relevant approvals under the Petroleum and Geothermal Energy Act 2000.

No seismic was acquired in South Australia during 2021 although surveying for the Dombey 3D seismic survey in the Otway Basin commenced in December. Acquisition of the Dombey 3D and the nearby Lodwick 3D both commenced in February 2022 and was completed in March. 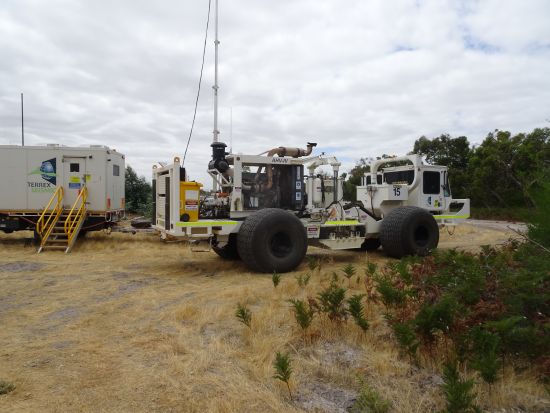 Cumulative petroleum production is shown in Table 2 and Figures 6-10 show sales and production trends. Detailed production data (to well and individual pool level) can be accessed via the PEPS South Australia online database. 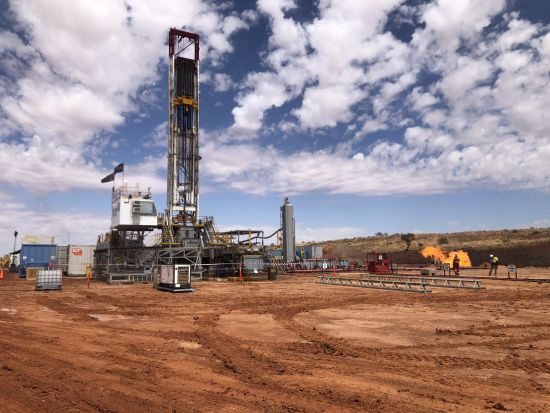 Santos and joint venture partner Beach Energy announced their final investment decision on the $220 million Moomba Carbon Capture and Storage project on 1 November 2021, with start-up expected in 2024. The Moomba CCS project will permanently store 1.7 million tonnes per year of carbon dioxide into the depleted oil and gas fields of the Cooper Basin, representing a cut of more than seven per cent to South Australia’s emissions.

The Santos Carbon Storage Statement of Environmental Objectives was approved and gazetted on 22 April 2021. Santos is now in the process of acquiring activity specific approval for CCS, which will include the submission of a Monitoring and Verification Plan, before on-ground works may begin.

The Moomba CCS project is eligible for Australian Carbon Credit Units under the Commonwealth Emissions Reduction Fund, after a CCS methodology was approved by the Federal Government on 1 October 2021. Furthermore, the Federal Government announced a $250 million grant program on 30 September 2021 to deploy carbon capture, use and storage at scale.

Chevron announced on 5 October 2021 that it is contributing more than $2.45 million to a new laboratory and research at the University of Adelaide’s Australian School of Petroleum and Energy Resources.

Roundtable for Oil and Gas in SA

The Roundtable for Oil and Gas Projects in South Australia was formed in 2010 and its members come from  industry, governments, peak representative organisations for industry, environment protection organisations, aboriginal people, research institutions and individuals. The aim of the Roundtable is to provide a forum for members to help inform the South Australian Government on the key priorities that will underpin the Roadmap of Onshore and Offshore Oil and Gas Projects.

The last meeting was held on 9 December 2021. You are invited to attend the next meeting of the Roundtable for Oil and Gas Projects in South Australia:

When: 20 October 2022
Where: National Wine Centre of Australia, Corner of Botanic and Hackney Roads, Adelaide SA 5000.
For further details: Roundtable for Oil & Gas

Review of the Petroleum and Geothermal Energy Act 2000

To maintain leading practice regulation of South Australia's petroleum, gas storage, pipeline transmission and geothermal energy industries the Minister for Energy and Mining introduced the Petroleum and Geothermal Energy (Energy Resources) Amendment Bill in the House of Assembly in August 2021. In response to submissions from the hydrogen industry during the consultation phase, the Bill expands the current legislation to include generation of any hydrogen from means not already permissible. This will afford hydrogen generators the same best practice regulatory and one-window to government regime as is currently provided to the upstream petroleum sector under the existing legislation.

Should the Bill pass both Houses of Parliament as expected in 2022, DEM will develop draft regulations for public consultation.

The Petroleum and Geothermal Energy Act is designed as an effective, efficient and flexible regulatory system for all exploration and production activities for petroleum, gas storage and geothermal resources onshore in South Australia, as well as the construction, operation and technical regulation of high-pressure transmission pipelines.

Key objects of the Act include:

DEM Energy Resources Division prepares an annual compliance report to report on the administration of the Act and the regulatory performance of the industries covered by the Act. Current and previous compliance reports can be accessed on our website.