The Woomera Prohibited Area (WPA) covers an area of 122,188 square kilometres approximately 450km NNW of Adelaide. The WPA is a globally unique military testing range and a key asset in Defence capability development. The WPA is also an area of potential economic importance in terms of its natural resources – and some mining is already conducted in the WPA. The Government favours multiple land use in the WPA to the maximum extent possible.

The WPA has been declared a Prohibited Area under Part VII of the Defence Force Regulations and is used for 'the testing of war material' under the control of the Royal Australian Air Force.

In August 2014 the new statutory access regime for new non-Defence users in the WPA came into force with the passage of the Defence Legislation Amendment (Woomera Prohibited Area) Act 2014 by the Australian Parliament. It amends the Defence Act 1903 (Cwth) by inserting Part VIB of the Defence Act and sets out a permit system, the access management zones with defined exclusion periods, new compliance and enforcement measures, compensation, and a process for review of decisions. The administrative details of the new statutory permit system are contained in the WPA Rule 2014.

Note that the new permit system to access the WPA applies to new non-Defence users including resource exploration and mining companies, opal miners, tourists and environmental/research organisations. Existing miners, pastoralists, Aboriginal persons and traditional owners are defined as existing users whose access will continue to be governed by the Defence Regulations 2016. 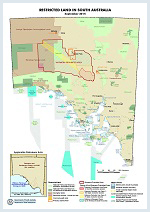 Under new management framework arrangements within the WPA, Defence remains the primary user of the area. The WPA has been divided into Green, Amber and Red access zones, each offering different levels of access or time share to non-Defence users.

A detailed map, including licence overlays and GIS data is available from the South Australian Resources Information Geoserver (SARIG).

Non-Defence users may be required to evacuate up to an annual cap of 56 days, in blocks of 7 days duration. Non-Defence users may not need to be evacuated during the course of the year, depending on the frequency and type of testing being conducted in the Green access zone.

Non-Defence users in the Amber access zone will be notified of the evacuation windows for the coming financial year every March. This is to assist commercial planning by providing a clear indication of when non-Defence users will and will not be able to access the WPA.

The one exception will be geological survey conducted by the South Australian Government in collaboration with Commonwealth government agencies. 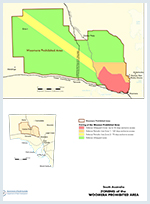 Separate to the Green, Amber and Red access zones, the Defence Minister unde rthe WPA Rule has granted a standing permission for people to access the Central Australian railway line, the Stuart Highway, the William Creek to Coober Pedy Road, the Lake Cadibarrawirracanna Road (also known as Public Acess Route 18), the Olympic Dam Highway (B97) and Woomera Village. The Defence Minister may however suspend the standing perission over the access routes and close the temporarilty when required for the resting of war material.

The Amber Zone exclusion periods are published in March of each year showing the access restrictions which apply during the following financial year (ie 1 July to 30 June).

Restrictions that may take place in parts of the Green Zone are notified at least 6 months in advance for resource production permits holders and a minimum of 21 days prior to the activity for all other users.

More information about the current exclusions periods can be found at: www.Defence.gov.au

Procedure for entry into the WPA

Companies seeking access for exploration activities to the WPA must:

The Woomera Prohibited Area Advisory Board monitors and reports on the balance of national security and economic interests in the WPA, oversees the implementation of the co-existence  policy arrangements and fosters strategic relationships between Defence and non-Defence users of the WPA.

The WRX layer available from the South Australian Resources Information Gateway shows the restricted airspace above the Woomera Prohibited Area (WPA) and forms part of the RAAF Woomera Test Range (WTR). The layer is a helpful tool when planning to conduct airborne surveys and other airspae-related activities over the WPA.

The layer is divided into individual restricted areas (blocks). One or a combination of restricted areas can be activiated (ie airspace above that portion of the WPA becomes restricted) when testing of war material is taking place during an exclusion period.