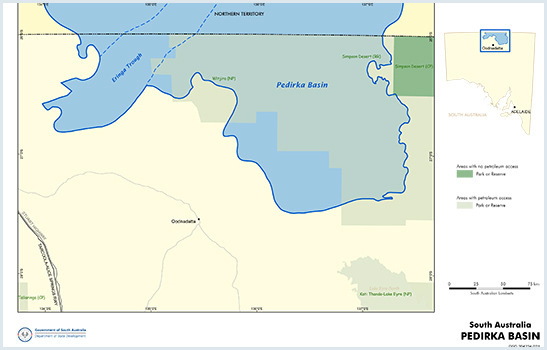 It is an intracratonic basin unconformably overlying the SE Amadeus Basin and western Warburton Basin which were deformed during the Alice Springs and possibly Delamerian Orogenies. 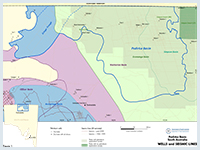 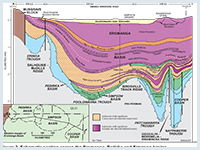 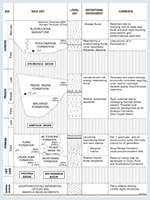 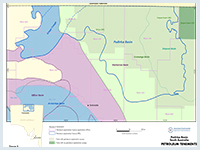 The Pedirka Basin has an area of 60 000 km2, just under half of which is in South Australia and the remainder in the Northern Territory. It is an intracratonic basin unconformably overlying the SE Amadeus Basin and western Warburton Basin which were deformed during the Alice Springs and possibly Delamerian Orogenies.

A final NW–SE compressional phase of the Alice Springs Orogeny in the Mid to Late Carboniferous initiated deposition in the Pedirka Basin and created thrust faults such as occur at Mt Hammersley. Permo-Carboniferous sediments were subsequently deposited in a tectonically quiescent sag phase. In South Australia the Permian is entirely overlain by up to 2500 m of Triassic to Late Cretaceous sediments of the Simpson and Eromanga basins.

NNE-striking high-angle reverse faults separate NNW to NNE-trending anticlinal complexes. The most prominent is the Dalhousie–McDills Ridge separating the Pedirka Basin into a western and eastern portion. Thin Permo-Carboniferous sediments are preserved across the ridge linking the two depocentres. The thickest sediments estimated from seismic interpretation (1525 m), are preserved in the Eringa Trough. Mt Hammersley 1, drilled in 1987 on the eastern flank of the trough, intersected 990 m of Permo-Carboniferous strata. Maximum thickness on the eastern side is ~550 m near Mokari 1.

The sediments were subsequently uplifted and eroded during two major compressional episodes during the late Early to Late Permian and during the Tertiary.

Petroleum exploration commenced in the 1950s when licences covering the Cooper and Eromanga basins were first acquired by Santos, who went against conventional wisdom that commercial accumulations of oil would not be found in Mesozoic formations within the Great Artesian Basin.

Exploration in the Pedirka Basin was initiated in 1959 when Delhi and Santos were granted OELs 20 and 21, which were farmed out to the French Petroleum Company (later Total Exploration) and exploration during the first half of the 1960s included gravity, magnetic and seismic surveys and four wildcat wells.

A second round of activity occurred from 1969–79, when five seismic surveys were carried out and one well was drilled. The first commercial hydrocarbon to flow from the Eromanga Basin was gas produced from Namur 1 in 1976 (Cooper region). Oil was discovered in 1977 with uneconomic flows of oil from basal Jurassic and Triassic sediments in Poolowanna 1 in the Poolowanna Trough. The first economic oil flow was recorded from Strzelecki 3 (Cooper region) in the following year and this stimulated a major oil exploration program.

Exploration activity intensified in the Poolowanna Trough/Pedirka Basin area in the 1980s in response to the Poolowanna discovery. Six seismic surveys were carried out and five wells were drilled, three in 1985 and two in 1988.

Seismic reinterpretation by Santos indicated that five of the previously drilled wells were not valid structural tests being outside closure at all objectives. Of the 1985 wells, Oolarinna 1 had no independent fault closure and Glen Joyce 1 had little closure.

It should be noted that no wells have been drilled in the South Australian sector since the 1980s, although Central Petroleum drilled Blamore 1 and Simpson 1 in the Northern Territory in 2008. Exploration in the area would benefit from current ideas on the geology of the petroleum systems in the Cooper Basin region and modern technology and interpretation techniques.

The classification scheme used by Geoscience Australia has been used to determine the type of show present in a formation in the tables below.

Two Permo-Carboniferous formations are present in the subsurface and crop out on the basin margin in the Northern Territory. The lowermost unit (Crown Point Formation) consists of fluvioglacial and glaciolacustrine sediments. The overlying Purni Formation was deposited in a floodplain environment containing meandering river systems and extensive swamps in which coal developed.

Three facies suites are distinguishable on the basis of relative proportions of sandstone, shale and coal. Equivalents of the Stuart Range and Mt Toondina formations of the Arckaringa Basin are interpreted in Mt Hammersley 1.

The Purni Formation contains extensive coal-rich organic shale which appears to be both oil and gas-prone. It contains up to 4% dispersed organic matter, with vitrinite and exinite macerals present in moderate abundance. Data from Dalmatia 1 and Mt Hammersley 1 indicate poor to good source potential for oil in the Purni Formation.

In many areas geothermal gradients are too low for the sediments to have generated significant quantities of hydrocarbons. In South Australia thermal maturity appears to increase from west to east with VR approaching 0.9% maximum, equivalent to peak oil generation.

Crown Point shale is organically lean, average TOC ~0.2%. There is potential for richer source rocks if lacustrine facies are developed in deeper parts of the thick Eringa Trough section.

Sandstones of excellent reservoir quality are locally developed in both the Crown Point and Purni formations. Channel belt and point bar sands of the Purni Formation middle member have porosities from 6–12% and fair to good permeability.

Reservoir quality in the Crown Point Formation is best in the west with porosities up to 20–25% and permeabilities ranging from 300–2000 mD. Seismic data indicate a deepening and thickening of this reservoir facies well into the Eringa Trough. Reservoir quality deteriorates to the east; the best sand is found on structural highs in the glacial outwash deposits which commonly occur at the top of the formation.

Intraformational seals occur in both formations, and Triassic and Jurassic rocks provide a regional seal over the eastern part of the basin.

Figure 5 shows the licence status at the time of publication. For further information on holders of Petroleum Tenements in South Australia.

Youngs BC, 1976. The geology and hydrocarbon potential of the Pedirka Basin. South Australia. Geological Survey. Report of Investigations, 44.