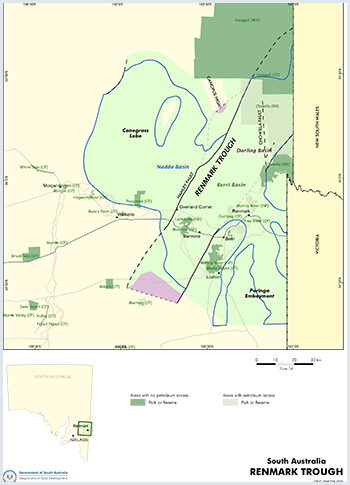 The Renmark Trough is an Early Permian - Early Cretaceous basin. 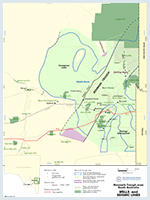 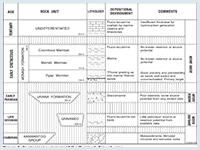 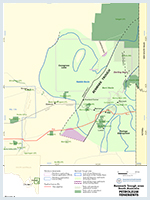 The Early Permian Nadda Basin and Early Cretaceous Berri Basin both underlie the Tertiary Murray Basin. They collectively span 9440 km2 of eastern South Australia and are located east of the Adelaide Geosyncline.

The sediments are preserved in structurally controlled depressions, namely the Renmark Trough, Canegrass Lobe and the Paringa Embayment and are confined entirely to the subsurface. They unconformably overlie either Late Devonian sediments of the Darling Basin or Cambrian Kanmantoo Group, although recent DEM drilling has indicated significantly older ?Adelaidean basement.

Petroleum exploration commenced in the 1950s in the area to the south of the Nadda and Berri basins. It was not until 1961 that the Department of Mines commissioned an aeromagnetic survey over the western Murray Basin which revealed a deeper basin outline in the Renmark area.

Follow-up seismic refraction surveys by the department and the BMR in 1961 and 1962 led to the drilling of Loxton 1 by the Australian Oil and Gas Corporation. Over the ensuing 10 years numerous oil and petroleum licences were taken out and an additional seven wells in the Renmark Trough area were drilled without commercial success. Three seismic refraction surveys by the department in 1965 and additional surveys in 1967 and 1969 by Associated Australian Oilfields (OEL 39) were completed during this period and surrendered in 1968 without further acquisition of seismic data or drilling of wells.

No further exploration activity was conducted until 1980 when International Mining was granted PEL 16 covering an area of 15 042 km2. In 1984 Overland Corner 1 was plugged and abandoned at 640 m. During the period 1986–87, 154 km of seismic were shot culminating in the drilling of Cooltong 1 in 1988 on an anticlinal structure in the deeper portion of the Renmark Trough.

The well reached a total depth of 1380 m in Late Devonian redbeds after intersecting sediments of the Murray, Berri and Nadda basins. In 1986 International Mining was granted PEL 37 over a relinquished portion of PEL 16. However, no more work was conducted in either PEL 16 or 37 and the permits were surrendered in 1990 and 1991 respectively. PEL 64 was granted to Corporate Developments in October 1995 over the Renmark Trough and surrendered in 1998 without further acquisition of seismic data or drilling of wells.

PEL 531 and 558 were granted to Liberty Resources Ltd in 2010; both were surrendered without significant exploration being carried out.

PEL 174 was granted to Energy Exploration Ltd in 2010 and was surrendered in 2015 without significant exploration being carried out.

Variable thicknesses of the Early Permian Urana Formation of the Nadda Basin occur in the Renmark Trough, Canegrass Lobe and Paringa Embayment, unconformably overlying either Late Devonian sediments of the Darling Basin, or Cambrian Kanmantoo Group. It is likely that bedrock also comprises Adelaidean strata.

The Urana Formation is at least 395 m (Nadda 1) although it is thought to be considerably thicker in the Renmark Trough. The formation comprises shale, siltstone, sandstone and diamictite with occasional conglomeratic and carbonaceous intervals. It extends into New South Wales and Victoria and appears to represent a proglacial to post-or non-glacial sedimentary sequence.

The Early Cretaceous Monash Formation, divided into the Pyap, Merreti and Coombool members, unconformably overlies the Urana Formation or Neoproterozoic to early Palaeozoic basement and is overlain by the late Palaeocene to Early Oligocene Renmark Group of the Murray Basin.

The Aptian Pyap Member is a transgressive unit passing up from non-marine fluvial sandstone and minor coal to nearshore marine deposits at the top of the unit. It is overlain by the claystone and siltstone dominated Merreti Member which was deposited during a period of peak marine transgression into the Berri Basin via the Eromanga Basin. Uplift or cessation of subsidence in early Albian time led to a return to non-marine conditions during which the Coombool Member was deposited. It comprises claystone and siltstone with minor interbeds of highly lithic sandstone thought to have been derived from a volcanic source.

Organic matter was oxidised. Up to 1500 m of Devonian sediments within the Renmark Trough are largely unknown and untested. Samples from three New South Wales bores returned very low TOC determinations (<0.10%) and it would appear that the terrestrial ‘redbed’ deposits of the Late Devonian lack suitable source rock quality and richness.

Maturity data from Cooltong 1 indicates that the Devonian succession is overmature for oil and in the wet gas to dry gas window (VR = 1.54–1.97).

Minor carbonaceous and coaly intersections of the Early Permian Urana Formation give moderate TOC values up to 0.8% although their extent and hydrocarbon source potential remains unknown. Recent apatite fission track analysis and VR sampling in Nadda 1 provide a new understanding of the thermal history of the Renmark Trough. Based on the reconstructed thermal history, the Early Permian units in Nadda 1 reached maximum maturity (early mature) during the Jurassic, while the overlying Early Cretaceous and Tertiary units are currently immature.

The most favourable source rocks would appear to be the marine Merreti Member although a lack of maturity is the constricting factor for hydrocarbon generation. Early Cretaceous sediments in Cooltong 1 are early mature for oil (VR range 0.32–0.70) with remaining wells either not sampled or immature over the Cretaceous section.

Late Devonian reddish brown sandstone has excellent reservoir characteristics. Tarrara 1 (New South Wales) has measured porosities up to 21% and permeabilities up to 487 mD. Porosity in the single South Australian intersection (Cooltong 1) is low.

Sandstone and conglomerate of the Urana Formation have good to excellent porosity. The Pyap Member of the Monash Formation is largely unconsolidated and has porosities up to 30% and up to 2000 mD permeability.

Intraformational shale of the Urana Formation and the mudstone-dominated Merreti Member would provide major seals.

Seismic surveys over the Renmark Trough and Paringa Embayment indicate an absence of sizeable anticlinal structures.

The Canegrass Lobe remains largely unexplored with no detailed seismic work carried out to date although there is an indication of some closure west of the southern Hamley Fault. There is also the likelihood of fault traps along the Hamley Fault. Pinchout traps may occur in the Paringa Embayment and Renmark Trough where Devonian and Permian sediments are pinched against the flanks of the overlying Berri Basin.

There may be potential for unconventional shale gas liquids or deep coal seam gas in the deeper parts of the Renmark Trough on the downthrown (eastern side) of the Hamley Fault that has not been intersected by drillhole.

Several National Parks and Wildlife reserves overlie the Renmark Trough area (South Australia Reserved Land figure). Exploration is not permitted in some of these.

Figure 4 shows the licence status at the time of publication. Use this link for further information on holders of petroleum tenements in South Australia.

There are no current licences over the Renmark Trough.

Brown CM and Stephenson AE, 1991. Geology of the , southeastern . Bureau of Mineral Resources, Geology and . Bulletin, 235.

, McDonald PA, Frankel E and Moore DH, 1995. A preliminary appraisal of the pre-Tertiary infrabasins beneath the , northwestern . VIMP Report 16. . Department of Agriculture, Energy and Minerals.

O’Brien PE, 1986. Stratigraphy and sedimentology of Late Palaeozoic glaciomarine sediments beneath the , and their palaeoclimatic significance. BMR Journal of Australian Geology and Geophysics, 10:53-63.