South Australia is at the vanguard of the global energy transition, having transformed its energy system from 1% to over 68% renewable energy in just over 15 years.

By 2025/2026, the Australian Energy Market Operator forecasts this could rise to approximately 85%. 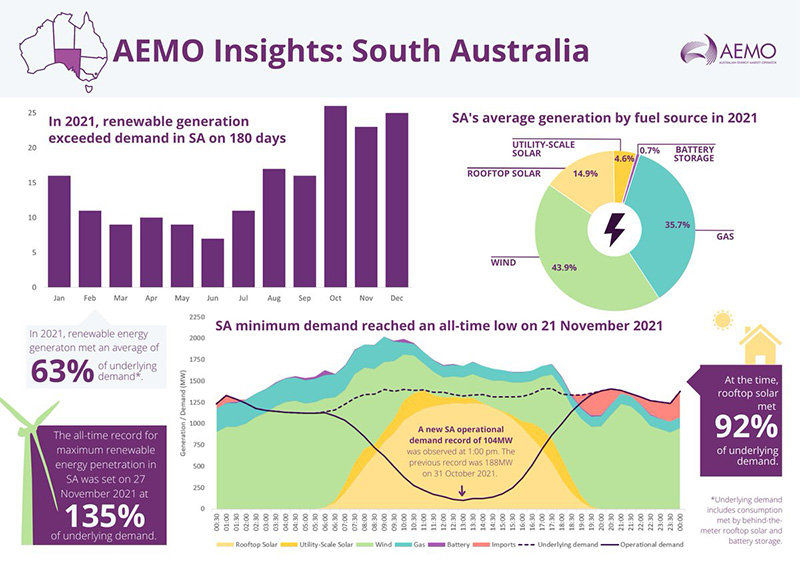 South Australia has attracted over A$6 billion investment in large-scale renewable energy and storage projects to date with over A$20 billion in the investment pipeline.

We are focused on:

The Hydrogen Jobs Plan will see the construction of a world-leading hydrogen power station, electrolyser and storage facility within the Whyalla City Council. The Plan will deliver significant benefits for South Australia, including lower electricity prices for business and industry, thousands of new jobs for South Australians and unlocking the development of a $20 billion pipeline of renewable energy projects.

Project EnergyConnect, a new Interconnector between South Australia and New South Wales, will support the expansion of the renewable sector by enabling green energy produced in South Australia to be exported to NSW, while providing increased power system reliability.

With the support of the Government of South Australia, Tesla and electricity retailer Energy Locals are developing South Australia's Virtual Power Plant (SA VPP) - a network of potentially 50,000 solar and Tesla Powerwall home battery systems across South Australia, all working together to form the world's largest virtual power plant.

We have one of the best climates for solar, with three large scale solar farms and one of the highest per capita levels of rooftop solar installed anywhere in the world. Solar PV generated over 20% of South Australia’s electricity in 2020–21.

We have world class wind resources, with 22 wind farms in operation and two under construction. Wind generated over 40% of South Australia’s electricity in 2020–21, the highest percentage share of any Australian state or territory.

South Australia has one of the highest uptake of residential batteries in Australia and has four grid-scale batteries, headlined by the world-renowned Hornsdale Power Reserve built in 2017 and expanded in 2019.

South Australia has the wind, sun, land, infrastructure and skills to be a world-class producer, user and exporter of hydrogen.

South Australia’s Hydrogen Action Plan sets out 20 key actions across five areas to realise the vision of leveraging the state’s competitive advantages to become a world class hydrogen supplier. These key areas are:

The South Australian Government has to date committed more than $40 million in grants and loans to the development of three megawatt-scale renewable hydrogen projects including:

In 2020, South Australia completed a pre-feasibility study for exporting hydrogen from South Australia to Asia and produced a hydrogen export modelling tool and prospectus for use by industry.

Also in 2021, the South Australian government called for Expressions of Interest from industry to access publicly owned land at Port Bonython. Port Bonython was identified through the state's Hydrogen Export Modelling Tool as a highly prospective location for both green and blue hydrogen export.

The South Australian government is making the state’s biggest ever investment in electric vehicles, committing $18.3 million to roll out its Electric Vehicle Action Plan.

The government has also announced in October 2021 a $3,000 State Government-funded subsidy for motorists who purchase a new electric vehicle as well as a three year motor registration fee exemption for new electric vehicles purchased before 30 June 2025.

Minerals are critical to powering the world’s clean energy and technology transformation. South Australia’s major export – copper – is leading this transition with 67% of Australia’s copper resources.

As we move from 60% to 100% net renewable energy by 2030, South Australia is growing ‘green’ minerals and processing industries to supply copper and other critical minerals across the globe, for low emissions technologies including electric vehicles and renewable energy technology. There is strong demand well into the future for our natural resources, boosted by the world’s largest zircon mine, 65% of Australia’s graphite, cobalt and magnesite deposits, and new rare earth element discoveries.

Explorers and miners are supported by a modern regulatory system and a willingness to actively pursue a sustainable pipeline of mineral products aiming for low impact activities, zero emissions mines of the future, and sharing the benefits with communities.

South Australia's leadership in transitioning its energy system, abundant natural resources, skilled workforce and research sector provide a strong base from which to transform its economy and achieve its twin goals of reducing state greenhouse gas emissions by more than 50% below 2005 levels by 2030, and achieving net zero emissions by 2050.

If you are looking to identify opportunities, strategic partnerships and get advice on the South Australian energy sector, contact:

You can also speak to the Energy and Mining sector specialists.