In 1906 AJ Smith mistook a dark coloured ore for tin and inadvertently made the first discovery of a radioactive material at Radium Hill. Sir Douglas Mawson identified uranium within the sample and named it davidite after the late Sir Edgeworth David.

Following this initial discovery the area was worked intermittently for the recovery of radium (mainly for medical purposes), although all operations were considered unsuccessful.

A few hundred kilograms of uranium were also produced largely as a by-product, and it is believed that this was used as a bright yellow pigment in glass and ceramics. However it was not until the 1940s that the potential for uranium was fully realised, and as a result, requests were made by the British and American governments to set up a mining and processing operation to produce yellowcake.

The full-scale operation was commissioned and operated by the South Australian Government to satisfy a contract signed by the Commonwealth and State Government with the UK-USA Combined Development Agency for delivery of uranium over a seven year period.

Substantial development work was undertaken prior to full-scale operations using conventional mining methods commencing in November 1954. The lodes were initially opened up by sinking of the main shaft, then development of a system of levels.

Radium Hill mine and treatment plant (circa 1926)

Tipping ore truck under ground at Radium Hill mine (circa 1955) 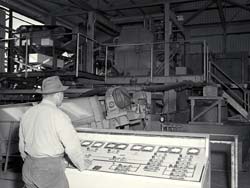 Heavy media separator at the Radium Hill mine (circa 1954)

A township to support 1100 people was built, with water being piped from NSW, a railway spur constructed to connect Radium Hill with the Broken Hill-Port Pirie line, and a power transmission line constructed from Morgan. Between 1949 and 1952, the Housing Trust built 145 houses, many prefabricated. A population of 867 was recorded at the township in 1961. The residential area comprised houses, a hospital, school, government retain store, canteens, swimming pool, and other support, recreational and commercial facilities.

Following closure of the site in 1961, much of the infrastructure and buildings were dismantled and/or removed, together with some remedial measures considered suitable for the day being undertaken. This largely involved the backfilling of a number of the mine openings, and possibly (although not verified) minor armouring of the main tailings impoundment at the same time.

In 1981, a decision was made to rehabilitate the impoundments with a cover of soil using material from four adjacent borrow pits. The earthworks required for this were managed and completed by the former South Australian Engineering and Water Supply Department. Approximately 75,000 m3 of material was used during construction of the covers.

Following the decommissioning period, a number of exploration companies have been active in the area, generally in pursuit of minerals other than uranium. In addition, some minor testing of the tailings material has been carried out to determine quantities of rare earth elements (REE) and the potential extraction of these minerals.

The site is a registered premise under the Radiation Protection and Control Act 1982 (RPC Act); a certificate of registration has been issued for the site by the Environment Protection Authority, which includes a number of conditions. These conditions are aimed towards the development of an appropriate overall long-term management plan.

Little remains today of the 1954-61 uranium-mining period or earlier radium extraction operations other than a number of foundations, infrastructure remnants, tailings impoundment and some waste rock and heavy media reject piles.