The Curnamona Province is a 300 by 300 km block of shallow to outcropping basement rocks that extends from Olary, in the northeast of South Australia, 450 km northeast of Adelaide, to east of Broken Hill across the New South Wales border. 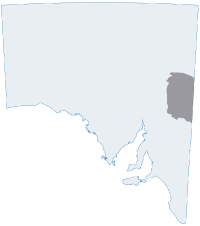 The Willyama Supergroup, comprising greenschist to granulite facies metasediments with lesser meta-volcanic intercalations, was deposited between ~1720 and ~1640 Ma in a largely rifted basin. This formed part of an extensive late Palaeoproterozoic basin complex at the eastern margin of the Australian Precambrian craton containing giant Pb-Zn orebodies such as Broken Hill, Mount Isa and McArthur River. The Curnamona Province is divided into domains based on sedimentary facies, volcanic, tectonic and metamorphic characteristics: Olary Domain in the southwest, Broken Hill Domain in the east (largely in NSW but extending a short distance into SA), the Mulyungarie Domain in the centre and straddling the state border, and Moolawatana Domain in the northwest. The Mudguard Domain of Mesoproterozoic volcanic rocks overlies the central portion of the Province; these volcanic rocks occupy a shallow subsurface ridge, the Benagerie Ridge, which separates two deeply buried and so far not drill-intersected portions of the Province, the Erudina Domain in the west and Quinyambie Domain in the east. No basal unconformity or basement to the Willyama Supergroup is known. The oldest exposed rocks are the Curnamona Group of commonly albitised, fine to medium-grained, shallow-water siliciclastic metasediments. Felsic lava and volcaniclastic intercalations range in age from 1718 to 1714 Ma (U-Pb SHRIMP ages on volcanic zircons). Minor facies variations include pure and feldspathic quartzite, clean cross-bedded metasandstone, pelite, psammopeltie, calc-silicate, calc-albitite and rare marble. The Curnamona Group is known only in the Olary Domain. In the Broken Hill Domain, the lower Willyama Supergroup is represented by albitic and migmatitic paragneisses including the Rantyga and Thackaringa Groups, with rare intercalations of volcanic parentage dated at ~1710-1705 Ma.

In the Olary Domain, rocks of this age are absent, and a hiatus in deposition of some 15 m.y. followed Curnamona Group sedimentation. During this interval, A-type granite of the Ameroo Subsuite was intruded into the Curnamona Group at ~1710 Ma. Sedimentation resumed with the Saltbush Group. At its base is the Bimba Formation, a variable, basemetal-anomalous unit of basal quartzite followed by biotite-speckled metasandstone, calc-silicate and marble. Sulphide occurs throughout the Bimba Formation, which is conformably overlain by volcaniclastic psammite of the Plumbago Formation dated at ~1695 Ma. A similar volcaniclastic psammite is found in the Broken Hill Domain associated with the Ettlewood Calc-silicate Member, a direct equivalent of the Bimba Formation. The Raven Hill Subgroup, overlying the Plumbago Formation, is tentatively correlated with the Broken Hill Group, which is host to the Pb-Zn_Ag orebody at Broken Hill. No equivalent of the ~1695 Ma volcaniclastic Hores Gneiss of the Broken Hill Domain has been found in Olary Domain, but there are abundant mafic intrusives of the Lady Louise Suite of similar age. The post-Hores Sundown Group may have an equivalent in the Olary Domain as the pelite-dominated Walparuta Formation.

The uppermost Willyama Supergroup, the Strathearn Group, extends northward from the Olary Domain into the largely subsurface Mulyungarie Domain. The outcropping portion is the Mount Howden Subgroup, directly correlated with the Paragon Group of the Broken Hill Domain by U-Pb SHRIMP geochronology on volcaniclastic zircons (~1650-1640 Ma) in metasandstone intercalations in carbonaceous pelitic metasediments.

The Olarian Orogeny, involving major crustal shortening with overall northwest-directed tectonic transport, may have commenced by ~1620 Ma and was accompanied by high-temperature low-pressure metamorphism, increasing in grade from greenschist facies in the centre of the Curnamona Province to granulite facies at Broken Hill in the southeast. Early folds were of isoclinal recumbent style, commonly sheath-like, accompanied by west or northwest-directed thrusting and mostly layer-parallel foliation. Later folds tend to be more upright, but with major plunge reversals and mostly northeasterly trends. These folds define the arcuate, dominantly NE-trending tectonic grain of the southern Curnamona Province. Deformation is likely to have been continuous and progressive.

Ninnerie Supersuite granites were intruded late in the deformation history, and include the S-type Bimbowrie (Olary Domain) and Mundi Mundi (Broken Hill Domain) Suites and the U-mineralised Crocker Well Suite in the west of the Olary Domain. Brecciation of competent lithologies such as calc-albitite by hydrothermal fluids formed massive calc-silicate breccia bodies. After granite intrusion, a system of anastomosing and conjugate greenschist facies shear zones cut the whole orogen with E-W, WNW and ENE trends, and local E-W folding suggests some N-S compression. The arcuate shape of the tectonic trends may have been imposed at this time, while the most deeply buried rocks in the south were progressively exhumed. In the central portion of the Province, bimodal mafic and felsic lavas were extruded onto the less deeply eroded surface of the Willyama Supergroup. Here sub-volcanic granite intrusions have potential as IOCG targets.

In the Moolawatana Domain, fine to coarse-grained, generally upward-coarsening siliciclastic sediments of the Radium Creek were deposited synchronously with the Olarian Orogeny, possibly in a foreland basin related to a northwestern Olarian thrust front. These were themselves folded, metamorphosed and intruded by Ninnerie Supersuite (~1580 Ma) and Moolawatana Suite (~1560-1550 Ma) granites. The Proterozoic basement of the Curnamona Province was onlapped by various Adelaidean (Neoproterozoic) and Cambrian sediments. The marginal zones of the province were affected by early and middle Neoproterozoic and Early Cambrian rifting events, and by deformation and low-grade metamorphism in the Cambrian Delamerian Orogeny. In the Mount Painter Inlier, magmatic, hydrothermal and uranium mineralisation activity continued into the mid-Palaeozoic.

The margins of the Curnamona Province are not original edges, but the limits of a crustal remnant encircled by Neoproterozoic and Palaeozoic mobile belts involving rifting, sedimentation and folding. As a result, the Precambrian continental basement in the mobile belts has been greatly attenuated and has subsided to deep levels beneath thick sedimentary accumulations and hence is not identifiable on aeromagnetic images.

The Mulyungarie Domain was onlapped by Mesozoic marine sediments of the Frome Embayment and by Tertiary sediments of the Callabonna Sub-basin. In the Eocene, palaeochannels were eroded into the basement rocks. Eocene channel deposits and Miocene lacustrine sediments are both host to significant uranium mineralisation derived from adjacent uraniferous basement rocks. Uranium has been extracted by in-situ leaching at Beverley and Honeymoon.