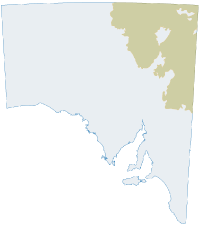 Deep weathering profiles developed in pre-Cenozoic rocks in inland SA, with concentration of iron oxide and silica forming duricrusts (ferricrete and silcrete) which characterise much of inland South Australia. Tertiary sediments are widespread on this weathered pre-Cenozoic landscape of South Australia. In the basins of inland South Australia (including the Lake Eyre Basin), and in paleochannels, relatively thin, fluvial and lacustrine, carbonaceous, sandy, clayey and carbonate sediments were deposited in lacustrine and fluvial settings.

Lake Eyre Basin in SA comprises a thick (>400 m) sedimentary succession in a northeastern depocentre that thins and becomes discontinuous towards the southwest. The basin is separated into the Tirari and Callabonna Sub-basins by the Birdsville Track Ridge, which is expressed at the surface by silcrete-capped (Cordillo, Gason and Cooryanna) domes of Mesozoic sediments.

During the late Paleocene, tectonic subsidence in northeastern South Australia formed the large, shallow Lake Eyre Basin. There is little evidence for deposition between the late Eocene and late Oligocene as a result of widespread gentle folding and uplift. During this period, rejuvenation of the Birdsville Track Ridge formed silcrete-capped domes, and divided the basin into its two sub-basins.

The Quaternary Period was a time of marked climatic and sea-level fluctuations. In the interior, widespread sand deserts of longitudinal dunes formed during arid phases that alternated with periods of moister climate when fluvial and lacustrine sedimentation was more extensive.