The Gawler Craton is an extensive region of Archaean to Mesoproterozoic crystalline basement underlying approximately 440,000 km2 of central South Australia. 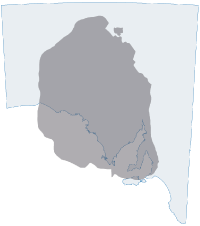 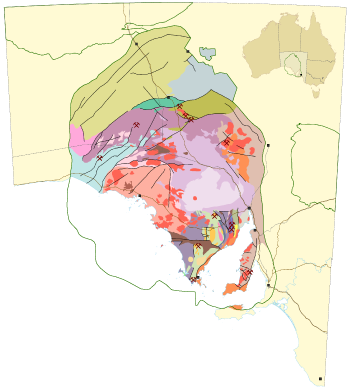 The southern boundary of the craton coincides with the continental margin, but the other boundaries are poorly constrained, being obscured by cover sequences; the Neoproterozoic Torrens Hinge Zone and Adelaide Geosynine to the east separating the Gawler Craton from the Palaeo- to Mesoproterozoic Curnamona Province and the Neoproterozoic to Palaeozoic Officer Basin to the north and west separates the Gawler Craton from the Musgrave Province and Albany Fraser Belt and Yilgarn Craton in WA. 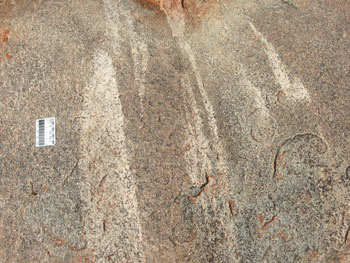 The oldest rock in the Gawler Craton is the Cooyerdoo Granite (~3150 Ma), exposed in NE Eyre Peninsula. It is the product of melting of preexisting tonalite-trondhjemite-granodiorite (TTG) crust, and inherited zircons and evolved Sm-Nd ages suggest that older crustal material up to ~3400 Ma may be present at depth. The Cooyerdoo Granite contains a gneissic fabric, and metamorphic zircons at 2500–2510 Ma, not known elsewhere in the Gawler Craton, may record the age of this fabric development.

The next event recorded in the Gawler Craton is the intrusion of the protolith of the Coolanie Gneiss (~2820 Ma), an S-type granite with minor intercalated quartzite and metapelitic sediments which occurs as a N-S-trending belt in the NE Eyre Peninsula. 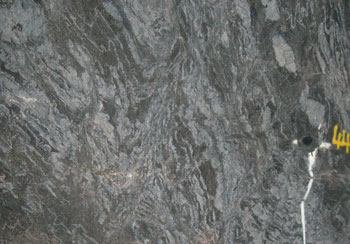 Gold hosted in migmatite of the Christie Gneiss, Mulgathing Complex at Challenger Gold Mine. (Photo 412913)

The late Archaean to earliest Palaeoproterozoic, (~2560–2470 Ma) was a period of basin development, represented by the Sleaford Complex in the southern Gawler Craton and Mulgathing Complex in the northern Gawler Craton. These two complexes probably represent a single late Archaean belt. Arenaceous and aluminous metasediments, banded iron formation and carbonates (Carnot Gneiss, Wangary Gneiss, Christie Gneiss and Kenella Gneiss) were deposited coeval with calc-alkaline arc-like felsic magmatism (Devil’s Playground and Hall Bay Volcanics) and plume related mafic-ultramafic magmas, including the Lake Harris Komatiite. These volcano sedimentary rocks were intruded by felsic to intermediate magmas (Glenloth Granite and Dutton Suite) derived from contaminated mantle melts in a magmatic arc environment. Maximum depositional ages of sediments in the Middleback Ranges (~2560 Ma) and Bungalow Prospect (~2555 Ma) directly south of the Middleback Ranges suggest sedimentation also occurred in the Neoarchaean in the NE Eyre Peninsula, but the relationship of these sediments to the Sleaford and Mulgathing complexes is uncertain.

The Sleaford Orogeny was followed by ~400 m.y. of tectonic quiescence. At ~2000 Ma felsic magmatism in central Eyre Peninsula comprised the intrusion of the protoliths of the Miltalie Gniess, a granodiorite containing high-grade migmatitic fabrics and a quartzofeldspathic gneiss to the west at Bascombe Rocks. Synchronously in the southern Eyre Peninsula, the Red Banks Charnockite and other unknamed charnockitic granites intruded into the Sleaford Complex. 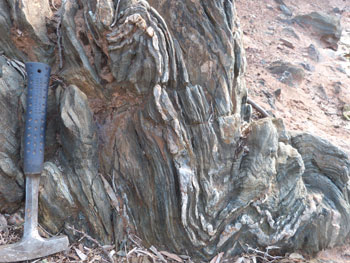 Sedimentation was punctuated in the eastern Gawler Craton by the short-lived contractional deformation of the Cornian Orogeny at 1850 Ma on Yorke Peninsula. Granitic to charnokitic and mafic magmas of the Donington Suite intruded along the entire eastern margin of the Gawler Craton, derived from a mantle melt contaminated by late Archaean basement. Granulite facies metamorphism was followed by decompression-dominated retrograde P-T evolution and S-directed extensional fabrics.

Basin development was terminated by the Kimban Orogeny (1730–1690 Ma), comprising low- to high-grade metamorphism together with felsic and lesser mafic magmatism. A number of major crustal-scale shear zones formed during the Kimban Orogeny, including the Tallacootra and Coorabie shear zones in the west and the Gallipoli and Kalinjala shear zones in the south. The Kalinjala Shear Zone is a dextrally transpressive subvertical high grade high strain zone 4–6 km wide along the eastern Eyre Peninsula which corresponds to a major magnetic discontinuity and separates differing lithostratigraphic zones. 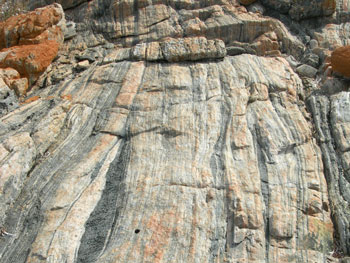 In southern Eyre Peninsula metamorphism and deformation occur adjacent to the Kalinjala and Gallipoli shear zones, comprising up to granulite facies metamorphism and non-cylindrical and chevron-style folding. In northern Eyre Peninsula metamorphic grade was lower and deformation was accommodated by E-verging fold-thrust systems. Kimban aged metamorphism in the Fowler and Nawa Domains reached upper amphibolite to granulite facies conditions with lower amphibolite facies conditions recorded in the Peake and Denison inliers. In the central Gawler Craton sedimentation and volcanism continued coeval with the Kimban Orogeny, consisting of isolated fault-bound basins containing basal conglomerates, quartzite and shale with felsic and mafic volcanics of the Eba and Labyrinth Formations (max. dep. age ~1715 Ma). 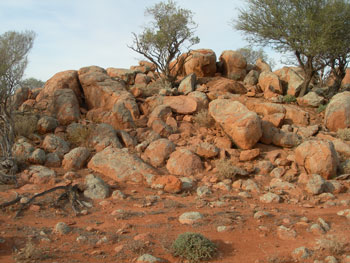 Magmatism during the Kimban Orogeny comprises I-type and S-type granites and minor mafic intrusions ranging from weakly deformed to migmatitic extending over most of the Gawler Craton, including the Middlecamp Granite (~1735 Ma) and the Moody Suite (~1690 Ma) on southern Eyre Peninsula, as well as equivalents in the Fowler Domain, Coober Pedy Ridge, Peake and Denison inliers and central Gawler Craton. I-type intrusives of the Tunkillia Suite (1690–1670 Ma) form an arcuate belt in the central Gawler Craton and discrete plutons in the western Gawler Craton, overlapping with the youngest Kimban-aged intrusives, and indicates magmatism continued in a post-orogenic setting.

The Kimban Orogeny was followed by a period of extension between 1680 and 1640 Ma, leading to local sedimentation and magmatism, including fluvial conglomerate, sandstone and siltstone of the Corunna Conglomerate on Eyre Peninsula (max. dep. age ~1680 Ma), sandstone shale, dolomite and dacitic to andesitic volcanoclastic rocks of the Tarcoola Formation (max. dep. age ~1655 Ma) in the central Gawler Craton and in the western Gawler Craton unnamed psammitic to pelitic sediments (max. dep. Age ~1640 Ma), known only as included blocks in Hiltaba-aged plutons.

In the southwestern part of the craton the alkaline felsic Nuyts Volcanics erupted at ~1630 Ma. They were intruded by felsic to mafic, juvenile, possibly arc-related magmas of the St Peter Suite at 1620–1615 Ma. This was followed by continued felsic volcanism in the central part of the craton, probably in a far-field continental back-arc setting, producing the voluminous (~90,000 km2) Gawler Range Volcanics (~1592 Ma). These volcanics comprise an initial phase of felsic and minor magmas derived from fractional crystallization and crustal contamination of mantle melts erupted from isolated volcanic centres, and a mature phase of large (200–300 m thick) high T (900–1100°C) felsic lavas derived from extensive crustal melting. The volcanics are comagmatic with high T fractionated felsic and minor mafic intrusives of the Hiltaba Suite (1595–1575 Ma) derived from a depleted mantle sources with a significant crustal component, and S-type Munjeela Suite (~1580 Ma).

Magmatism of the Gawler Range Volcanics in the central part of the craton is coeval with NW-SE directed deformation associated with S-verging nappe and fold-thrust structures and medium- to high-grade metamorphism in the Mount Woods inlier, and granulite to ultra-high temperature metamorphism in the Coober Pedy Ridge and Mabel Creek Ridge in the northern Gawler Craton. At the same time greenschist to lower amphibolite facies metamorphism and NE-SW-trending folding occurred on Yorke Peninsula in the eastern Gawler Craton. Deformation in the central Gawler Craton was partitioned into shear zones, including the E-W-trending Yerda shear zone and N-S-trending Yarlbrinda shear zone in the central Gawler Craton, and the N-S-trending Bulgunnia shear zone along the southern margin of the Mount Woods inlier. On the Eyre Peninsula retrograde shear zones with a dip-slip movement developed at this time.

The Kararan Orogeny (1570–1540 Ma) consists of high-grade metamorphism and shear zone development/reactivation affecting the western and central northern Gawler Craton and may represent the later stages of the deformation associated with the Gawler Range Volcanics and Hiltaba Suite. Granulite facies metamorphism is recorded in the Nundroo block of the Fowler Domain and may be linked with reactivation of the shear zones within the Fowler Domain. The Karari fault zone and associated shear zones in the central-northern Gawler Craton was also reworked at this time.