The Geological Survey of South Australia has partnered with the MinEx CRC to undertake a National Drilling Initiative project on the under explored Delamerian Orogen.

This project includes a geoscientific drilling program and additional research to understand the geology and mineral potential of both the Delamerian basement and overlying Murray Basin cover.

The National Drilling Initiative looks to drill multiple holes around Australia to map the regional geology and architecture and define the potential for mineral systems in 3D.

Within South Australia drilling will take place in the Cambrian-Ordovician Delamerian Orogen in the east of the state.

Until now exploration for base and precious metals within the Delamerian basement has been focused along the western margin of the Murray Basin. This project will provide new constraints on the geological setting, deformational history, thickness of cover and prospective mineral systems of the basement beneath the Murray Basin.

In 2019 the GSSA and collaborative partners undertook a geological review and data audit of the Delamerian basement. From this work two areas were identified for the NDI drilling program.

Stemming from the review, data compilation and release in Phase 1, two geographic regions were selected to focus geoscientific research programs and the NDI drilling campaign.

The Quondong Vale and Alawoona regions provide a cross-section of geological and geophysical domains within the basement to the Murray Basin. Future work in these regions will provide valuable knowledge on the Delamerian Orogen and its mineral potential. At Discovery Day 2022 Dr Claire Wade and Tom Wise gave presentations on their work in the NDI project.

All NDI field data collection has now been completed. It amounts to almost 7 km of hand-held pXRF and magnetic susceptibility readings, lithological and stratigraphic logging, core and chip tray photography, in addition to the large amounts of rigorous sample preparation and drying etc. 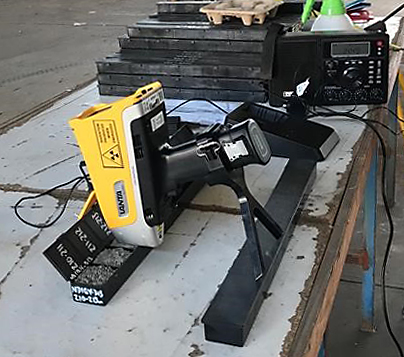 The final drillhole for the MinEx CRC National Drilling Initiative in the Delamerian has been completed, with an end of hole depth of 353 m. The final hole of the program was also the first field trial of the new MinEx CRC CT1000 rig.

Hole NDIAW_D08, in the Alawoona project area, intersected a mostly unaltered quartz-feldspar-hornblende (+/- biotite) intrusive. Detailed logging and analysis are underway and will soon be made available on the SA Drilling Atlas.

MinEx CRC have also released their latest quarterly update which focuses on the recent NDI workshop which brought together researchers to provide an overview of field data, acquisition and drilling results.

The NDI Delamerian Drilling Campaign team has been nominated for an SA Science Excellence and Innovation Award in the Excellence in Science and Industry Collaboration section. The GSSA was proud to be part of the research team for this project which includes CSIRO, the University of South Australia, Curtin University and Imdex Limited, under the organisation of MinEx CRC.

See the latest update on the project from MinEx CRC, including how successful the coiled tubing rig was in providing core during the project.

The second drilling location in the Quondong Vale region of the Delamerian NDI project has been completed with 12 drillholes providing a composite cross section through each of the geophysical domains in the drilling area.

A wide range of basement lithologies have been intersected using only the MinEx CRC Coiled-Tubing 500 (CT500) Rig. Approximately 3 m of basement core has been retrieved for all but one of these holes, further proving up the selective coring tool of the CT Rig.

Basement rocks range from coarse-grained mafic to ultramafic intrusions to submarine mafic lava flows and possible pillow structures to clastic (meta-)sedimentary rocks, deformed sedimentary breccias, all the way to coarse-grained felsic intrusions. When combined, these rock types paint a picture of a sub-marine region with large volumes of mafic magmas interacting with active structures and rapidly-depositing sediments. Detailed logging and analysis will follow these early interpretations and will progressively be made available on the SA Drilling Atlas.

Now that drilling has finished in Quondong Vale, the MinEx CRC CT1000 Rig (the CT500’s bigger-capacity sibling) will be rolled out for the first time in the Alawoona project area. One final hole, NDIAW_D08, will be drilled, aiming to intersect a post-tectonic mafic/intermediate pluton that is interpreted from regional geophysical imagery. This will complete 8 virgin holes in the Alawoona project area (4 of which were twinned), and the 12 holes drilled in Quondong Vale.

Stay tuned for the Alawoona project area to have the existing Section 15 removed, and ground released under the Exploration Release Area (ERA) process. The first batch of drill holes in the Quondong Station have now been completed by the CT rig.

Negotiation of the cover sequence has gone well with basement being intersected at around 200 m. The CT rig has been able to provide good chip samples through weathered basement, and 2.5–3 m of core for each of the holes.

A full 3 m stick of suspected monzonite core was a highlight from hole NDIQV_D09. Other basement lithologies intersected so far may include chlorite-talc altered claystone, volcaniclastics and potential tuffs, and amygdaloidal lavas.

As data becomes available it can be viewed via the South Australian Drilling Atlas.

Discovery Day 2021 had a strong NDI feel, with a whole session dedicated to the latest insights. Presentations from Stacey Curtis, Tom Wise, Rian Dutch and Wei Hong are available for viewing on the Discovery Day playlist.

As part of his Discovery Day talk, Rian Dutch announced the release of the South Australian Drilling Atlas. The interactive atlas allows access to new stratigraphy, lithology, petrophysical and geochemical data, including a downloadable drilling data package. The atlas will be updated as drilling data comes in, providing rapid access to field data.

The first full runs of core were gained from the coiled tubing. Previously only 20 cm lengths had been gained using this new technology, so the increase was a big step forward for this project. Runs with 100% recovery were obtained in both sedimentary and harder igneous lithologies.

NDIAW_D03 had a surprise basin make an appearance. A thin silicified sandstone/gravel with nodular and massive pyrite in the gravels gave way to more organic-rich muds until basement was reached. This sequence has been interpreted as possibly early Cretaceous Berri Basin, previously thought to only be present tens of kilometres further north. Going through the muds, basement porphyritic lavas were next, confirming the interpretation of a volcanic (and upper level plutonic) belt through the centre of the Alawoona area. Dating these volcanics will be important for the prospectivity of the region. 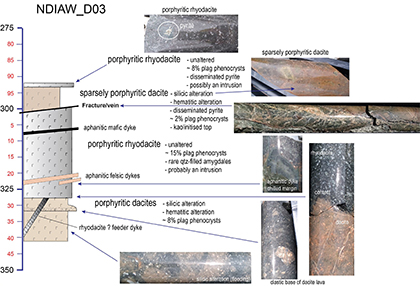 This hole intersected mafic and felsic igneous lithologies, with doleritic dykes or sills particularly well picked out by hand-held magnetic susceptibility measurements. High readings for these fine-grained mafic igneous intervals suggest that the geophysical target of a linear magnetic feature had been intersected. 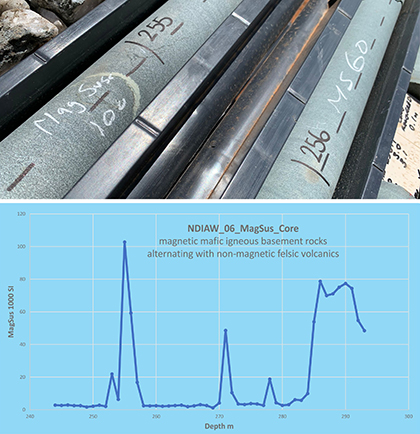 The first four drillholes have now been completed, with the fifth about to start.

The main lithology of the first diamond drillhole (NDIAW_D01) is a pinkish-grey medium-grained granite, and interstitial mafic mineral aggregates give this granite a clotty appearance. This granite contains a variety of mafic to intermediate enclaves probably indicating that magma mixing and melt hybridisation played a role in the formation of this granitic intrusion. A variety of alteration types are present, indicating a hydrothermal system has affected the region. 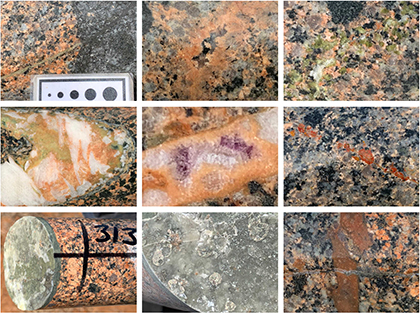 Core collage of veining-alteration from NDIAW_D01 in the Murray Basin. (Photo 418458)

The first drillhole has been started in Karoonda in the Murray Basin. The project is looking to get basement samples soon. 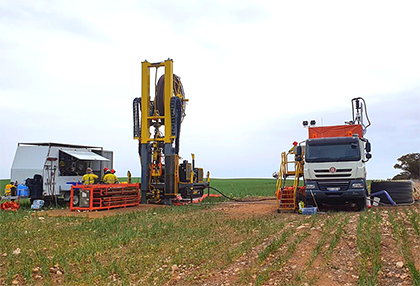 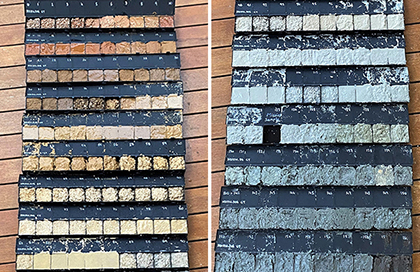 Listen to Senior Geologist Dr Rian Dutch talk about the NDI project and the plans for the year.

Delamerian Orogen mineral potential mapping: the Cu-Mo-Au mineral system. Interim report (PDF 2.7 MB)
A mineral systems analysis for Cu-Mo-Au in the Delamerian Orogen has been conducted to assess the area’s potential for this type of mineral occurrence. A conceptual model was delineated, and prospectivity maps were created. These maps can serve partially for drill and sampling campaign targeting. The conceptual model is implemented as a flexible workflow in ArcGIS, and it can be readily updated with new data. It is based on fuzzy logic manipulation of classified mineral system - critical data components prepared as evidence layers in GIS, to present various component statistical probability scenarios in map format for evaluation.

Throughout the project resources will be released to give a greater understanding of the Delamerian basement. These are designed to provide additional support to the exploration industry. You can access the full list of data releases, publications and maps through SARIG.

Presentations on the Delamerian National Drilling Initiative and allied research programs were given by Tom Wise and Stacey Curtis at the Uncover Curnamona symposium in June 2022.

40Ar/39Ar dating of low grade rocks of South Australia's Delamerian Orogen
Available via open access, this paper by Anthony Reid et al. details the record of structural re-activation on the western front of the Delamerian Orogen.