This report is verified to be accurate for the purposes of annual reporting to the Parliament of South Australia.

Submitted on behalf of the DEPARTMENT FOR ENERGY AND MINING by:

The annual report was submitted late as the final editing process identified the need to resolve inconsistencies of information contained within the report.

From the Chief Executive

The Department for Energy and Mining (DEM) delivers affordable, reliable and secure energy supplies in a transitioning national energy market, and responsibly unlocks the value offered by South Australia’s mineral and energy resources. The 2018-19 financial year has been a period of firsts for the Department for Energy and Mining. It was our first year as a stand-alone agency for energy and mining, the first at our new consolidated head office at Waymouth Street and our first annual report as a new agency that came into being on 1 July 2018.

Even with these many firsts, we have maintained continuity from our previous existence within larger agencies. The energy and mining divisions continue to build on a hard-earned reputation as reliable and respected industry regulators that are committed to safeguarding workplace health, safety and the environment. Our project managers and policy advisers continue to provide leadership, guidance and a commitment to deliver on the programs, legislation and regulations within our portfolio areas. Our expertise and experience helps inform other government agencies and co-regulators at a State and Commonwealth level.

A highlight of 2018-19 was establishing a three-year Strategic Direction document that sets out our vision and key priorities: effective, efficient and transparent regulation, lower energy prices, growing resource exports and supporting future industries and jobs growth. Underpinning these four priorities are four high performance enablers: our diverse, professional, accountable and respectful culture, our demonstrable professional and personal leadership, our meaningful engagement beyond our agency to all stakeholders and our commitment to deliver the best outcomes for South Australians. Internal workshops ensured every member of our workforce had an opportunity to provide input into our foundation document.

Overview: about the agency

Reporting required under any other act or regulation

Overview: about the agency 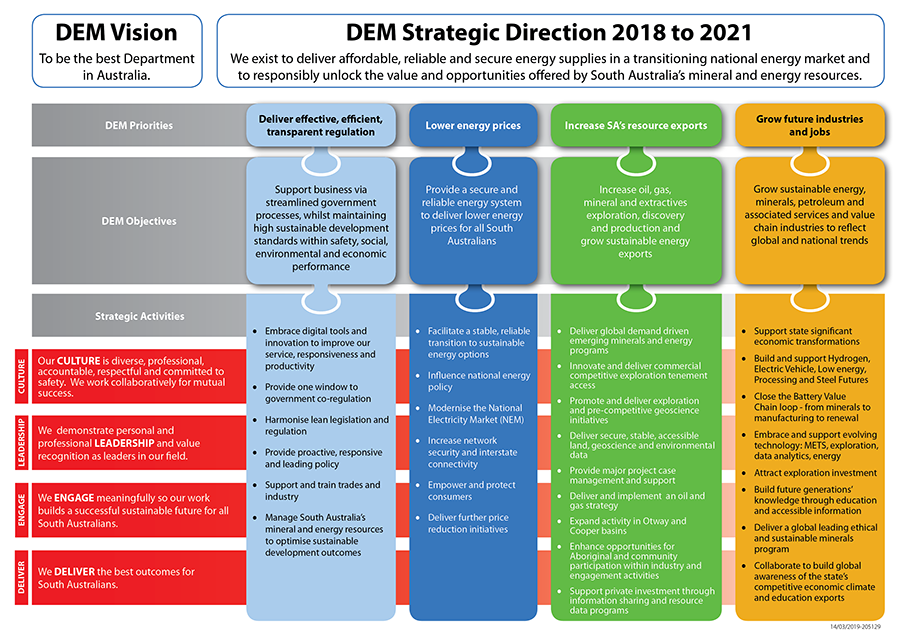 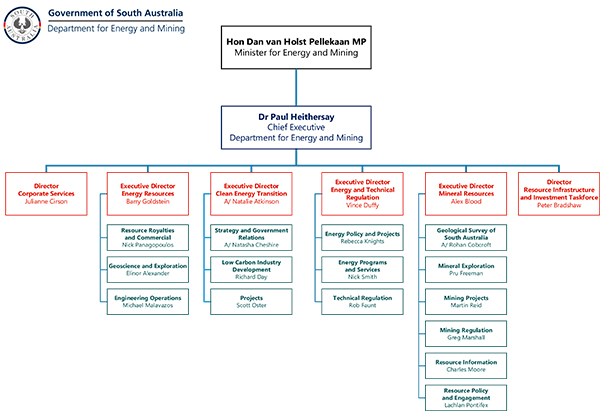 Changes to the agency

On 1 July 2018 the Governor of South Australia established by proclamation the Department for Energy and Mining as an outcome of the machinery of government changes announced by the incoming Marshall Liberal Government. The Department comprised the energy resources, mineral resources, energy and technical regulation, and energy plan implementation functions, and the Resources Investment and Infrastructure Task Force, all formerly within the Department for the Premier and Cabinet. The new department also established a corporate services division and office of the Chief Executive to support its functions as a stand-alone agency.

The Honourable Dan van Holst Pellekaan MP is the South Australian Minister for Energy and Mining.

Minister van Holst Pellekaan was elected to Parliament as the Member for Stuart in 2010. He was promoted to the Shadow Cabinet in 2011 and has held the Energy and Mining portfolio since June 2014.

After his re-election at the 2018 State Election, he was sworn in as Minister for Energy and Mining in the Marshall Liberal Government.

Minister van Holst Pellekaan started his working life as a labourer before playing four seasons in the National Basketball League and at the same time gaining a Bachelor of Economics. He then spent ten years with BP Australia before entering the small business sector as a shareholder and operator of Outback roadhouses for seven years. This was followed by three years developing cycle tourism in the Southern Flinders Ranges immediately before entering Parliament.

Minister van Holst Pellekaan’s electorate extends from Kapunda at its southern end, all the way up to the Northern Territory border. It heads east to the Queensland and New South Wales border. It includes the Mid North agricultural region, all of the Flinders Ranges and the vast north-east pastoral region surrounded by the Northern Territory, Queensland and New South Wales. The regional city of Port Augusta is its main population centre.

Dr Paul Heithersay, Chief Executive of the Department for Energy and Mining. The agency brings together the resources, energy and renewables divisions responsible for managing and regulating the State’s mineral, gas, petroleum and energy sectors on behalf of the people of South Australia.

Alex Blood, Executive Director, Mineral Resources leads the team responsible for the provision of geoscientific data and information to support investment in mineral exploration, and for the administration and regulation of mining and mineral exploration.

Alex is leading the development of policies to build on the State’s reputation for innovation in exploration, epitomised by the Plan for Accelerating Exploration (PACE), the South Australian Resources Information Gateway (SARIG), the South Australia Drill Core Reference Library and the Accelerated Discovery Initiative.

Peter Bradshaw, Director Resources Infrastructure and Investment Task Force, which is responsible for facilitating some of the State’s most significant transformation projects. The Task Force is focused on the South Australian government’s role in Nyrstar’s Port Pirie Transformation, the Steel Task Force and longer-term strategic projects.

Vince Duffy, Executive Director, Energy and Technical Regulation division, has been at the forefront of leading and developing responses to the many challenges faced by the State during the ongoing transition in the national energy market. The division is also home to the Office of the Technical Regulator, which plays an essential role in maintaining safety in the electrical, plumbing and gas industries.

Barry Goldstein, Executive Director, Energy Resources division, is passionate about the energy industry and focused on the development of leading practice regulation, the direction of research and investment attraction for petroleum, geothermal energy and greenhouse gas storage. Before joining the SA Public Service, Barry had more than 30 years’ international experience in the energy business as a geologist. Barry is a recipient of an Order of Australia Public Service Medal and a Lewis G Weeks medal for outstanding contribution to petroleum exploration.

Legislation administered by the agency

Performance at a glance

In 2018-19, the Department for Energy and Mining designed and implemented the Home Battery Scheme to support the installation of battery storage systems in 40,000 homes, led early works on the proposed New South Wales-South Australian interconnector Project EnergyConnect, and supported the State’s engagement in the Council of Australian Governments (COAG) Energy Council.

Electricity prices in South Australia fell in the 12 months to 30 June 2019. The Essential Services Commission of South Australia (ESCOSA) reported a fall in market offer prices equivalent to an average annual bill reduction of $62 for a residential customer and $141 for a small business customer. Seventy-three large energy users improved their energy costs by successfully implementing projects funded by energy productivity program grants.

The agency granted mining leases for the Kalkaroo copper and Siviour graphite projects as construction continued on the Carrapateena copper gold mine. The Steel Task Force continued to facilitate Whyalla Steelwork’s transformation, and the Resources Investment and Infrastructure Task Force led the government’s industry interaction on the Port Pirie Transformation and Olympic Dam Expansion project.
Most importantly, the agency has set up practices to ensure we can continue to drive efficiencies within our divisions that allow us to better engage and respond to our stakeholders.

With the goal to be the best government agency in Australia the focus for the first year was to establish foundational elements required for a high-performing organisation.

Culture is at the core of creating a place where people want to work. The agency developed an Enablers and High Performing Behaviours Framework, aligned with public sector values, through an agency-wide engagement process. This Framework will grow a culture of performance and accountability to enable delivery of our Strategic Direction, and is the basis for the development and implementation of Our People Strategy.

The launch of the Strategic Direction 2018-2021, and the strategic and business planning framework articulated alignment with government priorities and provided a line of sight for employees to have clarity about how they contribute.

With a focus on creating value to our stakeholders through improved processes and innovation, the agency initiated a digital transformation strategy to consolidate and reform our existing systems and processes, and improve our capability to use data in decision making.

From an operational perspective, key achievements included the creation of a Diversity and Culture Committee, adopting revised business processes for handling correspondence and Freedom of Information requests, implementing a significantly improved records management system and Complaints Management System and the launch of an intranet as the primary portal for sharing corporate information and seeking across-agency collaboration.

Data for previous years is available at: Not applicable - initial reporting year

Executive employment in the agency

Data for previous years is available at: Not applicable - initial reporting year

The Office of the Commissioner for Public Sector Employment has a workforce information page that provides further information on the breakdown of executive gender, salary and tenure by agency.

Financial performance at a glance

The following is a brief summary of the overall financial position of the agency. The information is unaudited. Full audited financial statements for 2018-19 are available in Appendix 2 (page 37 onwards) in the PDF version (PDF MB) of the Annual Report

The agency is an administrative unit under the Public Sector Act 2009 established on 1 July 2018 and the Resources and Energy and Energy Implementation groups transferred on that date from the Department of the Premier and Cabinet (DPC).

As the agency was established on 1 July 2018, there are no prior period comparative figures available in the tables below.

The agency reported a $22.215 million favourable result when compared with the 2018-19 original budget. This was mainly due to the reprofiling of initiatives, with expenditure budgets to be carried over to future years.

The agency’s major expenditure items for the year primarily related to the State’s Temporary Generators, Energy Initiative grant funding programs, and the Remote Area Energy Supply scheme. Further details on agency expenditure are disclosed in the full audited financial statements that are available in Appendix 2 (page 37 onwards) in the PDF version (PDF MB) of the Annual Report.

The following is a summary of external consultants that were engaged by the agency. Full details of the nature of work undertaken and actual payments made for the financial year are disclosed in Appendix 1.

The following is a summary of external contractors that were engaged by the agency. Full details of the nature of work undertaken and actual payments made for the financial year are disclosed in Appendix 1.

***Total contractor payments varies by $932,000 from the figure published in the audited financial statements due to the inclusion of payments for temporary staff.

Risk and audit at a glance

Fraud detected in the agency

The agency employs a range of risk-based strategies to control and prevent fraud. These strategies form the agency’s Fraud Control Plan and include, but are not limited to, a related policy and procedure, segregation of duties, pre-employment screening, and declarations of interest. Appropriate business practices are also reinforced through the Financial Management Compliance Program. The Plan and related activities are overseen by the Risk and Performance Committee.

The induction process ensures that all new employees are made aware of the Code of Ethics for the South Australian Public Sector through mandatory online training.

Number of occasions on which public interest information has been disclosed to a responsible officer of the agency under the Whistleblowers Protection Act 1993:
Nil

Reporting required under any other Act or Regulation

Number of public complaints reported (as required by the Ombudsman)

Consultancies with a contract value below $10,000 each

Consultancies with a contract value above $10,000 each

See also the Consolidated Financial Report of the Department of Treasury and Finance for total value of consultancy contracts across the South Australian Public Sector.

Contractors with a contract value below $10,000

Contractors with a contract value above $10,000 each

The details of South Australian Government-awarded contracts for goods, services, and works are displayed on the SA Tenders and Contracts website. View the agency list of contracts.

The website also provides details of across government contracts.