Section 65(1a) of the Petroleum and Geothermal Energy Act 2000 provides that person(s) or enterprise(s) may lodge an over-the-counter application for an exploration licence which overlaps an area of an existing exploration licence application. In such circumstances, the earlier application will rank ahead of any later overlapping application(s), and the Department would usually seek to have the first ranked applicant expedite steps enabling the grant of the licence as a precedent to the offer of a licence.

Note: Where an application is refused, the unsuccessful applicant may request the Minister to call for tenders for the relevant area. 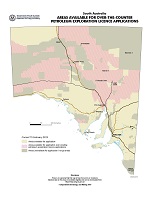 The map titled 'Areas Available for Over-the-Counter Petroleum Exploration Licence Applications' , is updated periodically as indicated in the legend contained within the map.