The search space reduction from the regional scale (several 100 km) to the camp scale (a few km) is one of the key aims of the GSSA to unlock the mineral potential of the state. Electromagnetic geophysics from long-period magnetotellurics to high-frequency airborne EM methods are tools to achieve this scale reduction.

The Australian Lithospheric Architecture Magnetotelluric Project (AusLAMP) aims to use magnetotellurics (MT) to provide 3D images of the electrical resistivity distribution of the crust and mantle beneath South Australia, leading to a better understanding of prospectivity.

Research using MT imaging has shown that zones of low electrical resistivity are areas of mechanically weak lithosphere which have undergone extensive shearing and faulting, providing pathways for fluid and magma. 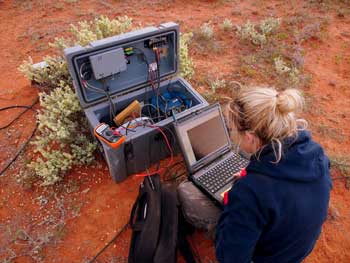 The results from the 400 long-period MT sites comprising the AusLAMP SA survey are used to build up 3D images of the electrical resistivity distribution of the crust and mantle and the datasets produced add another geoscientific layer of information for South Australia. Taken together with state-wide geophysical and widespread geochemical isotope data, this dataset enhances our understanding of the tectonic history of the state and helps to reduce risk in mineral exploration.

The AusLAMP project in South Australia, a collaboration between GSSA, the University of Adelaide, Geoscience Australia and National Collaborative Research Infrastructure Strategy (NCRIS) has produced the following outcomes to date:

In addition to the AusLAMP project, the GSSA currently undertakes two additional projects with the aim of building South Australia’s MT and AEM data and provide insights to mineral explorers. 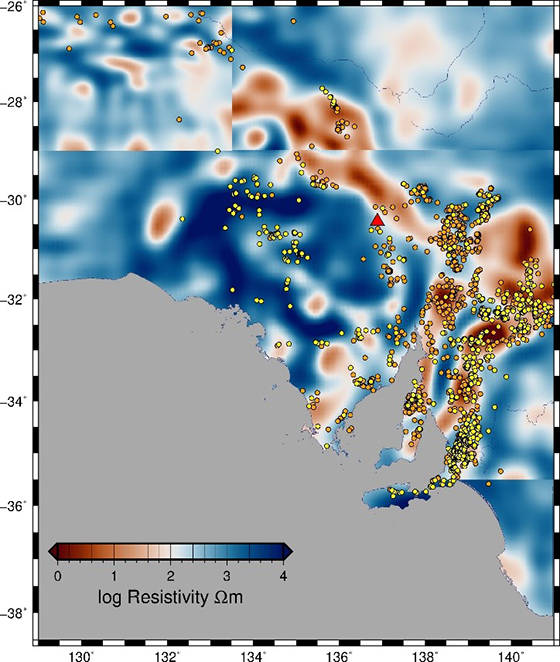 Together with CSIRO, the GSSA project team are combining 333 broadband MT sites and 3261.6 line km of AEM data to develop a workflow for integration of MT and AEM data along with the production of an improved map of depth to basement across the Olympic Domain.

By combining MT and AEM data this project will be able to map from shallow cover through to the entire lithosphere (~200 km).

You can hear more about the Olympic Domain project by watching Dr Hoele Seille’s (CSIRO) talk on Uncertainty mapping of the sedimentary basin architecture of the Olympic Domain: combining MT and AEM geophysics from Discovery Day 2021.

South Australian geology does not stop at the coastline, so how do we map the geology under the water? This sub-project considers how we measure offshore MT.

This GSSA project in conjunction with the University of Adelaide, the Scripps Institution of Oceanography at the University of California San Diego, AuScope, and Geoscience Australia intends to expand the coverage of AusLAMP 3D resistivity models offshore. By acquiring eleven offshore MT sites, the
conductivity anomalies imaged from AusLAMP can be resolved and refined in the coastal regions in the Spencer Gulf.

This sub-project is a pilot program to establish whether or not utilising MT offshore should be implemented in other study regions to provide a better understanding of the geology of the state and around Australia.

Approximately 400 AusLAMP sites are available to download as EDI files from SARIG, and can also be viewed on SARIG as phase tensor ellipses or induction arrows.

3D models of the northeast of SA are also available for download from SARIG, as are electrical resistivity depth slices for most of the state.